skip to main | skip to sidebar

PS  If you live in this area we are having an "An End of an Era" Sale on Memorial Weekend.  Should be quite a party, er garage sale, if you want to come by and say hello!

Well, as you can all imagine we are on the countdown to the big Homestead move.  It officially started on April 6, 2012; when we have just 2 months left at The Royal Ranch.  But, leave it to The Jeute's to get the scheduling all messed up.  My daughter went and broke her arm; and like we do everything, she did it BIG! 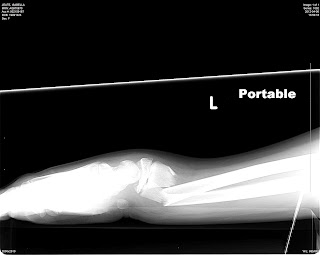 So, on the day we were to start our countdown and I was to be packing I was instead in the ER having this fixed on my beloved Baby Girl; who also just happens to be my "right hand girl", pun intended.  (Although thank God it was her Left hand as you can see on the X-ray!!!)

Anywho, the main reason I wanted to post today is that I have some brilliant packing ideas to share with you guys.  And you don't have to be moving to use packing ideas; anyone that stores stuff (which is pretty much every single person I know) could use these tips!

The first may seem quite obvious to some, but on a big move one must really think it through; grouping like things!  Take for instance my china cabinet, that is one of the places that I have started and will use for example here today.  Now, we are moving to a MUCH smaller place so a lot of my stuff is going into storage; but I would like to consider it a couple of different kinds of storage.  One that is a bit more accessible and one that may be gone for a few years.

So I started out by emptying the china cabinet and grouping all my like items: 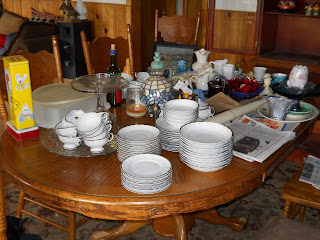 This may look like a huge mess, but actually it is organized chaos.  I am gathering things from around the house and deciding if they are going in storage 1) Needs to be accessible within a few months time (please, oh please God!) or storage container 2) May be gone for years, so I best have my poop in a group!  And don't forget the donate pile; always keep another box handy so that you can just toss items into it and then take it to a drop off location near you as you pack.  Even up here in the mountains we have places that will take all sorts of items, just do a bit of research; someone would love your gently used stuff; if it is more than gently used it might be time to recycle/trash it.  I am also making a sell pile which is turning into a sell house, our rental house will be a yard sale for the last couple of weeks we are here...  More on that later!

As you can see in the front of the picture, I have Grandma's china.  That will go in storage area 1 of course in case I ever get to host Christmas or Thanksgiving again.  Which I love to do, so I will be doing it for at least my family by next year, so the china needs to be accessible.  Anyway, these are the kinds of things that will help you decide what is important to YOU. 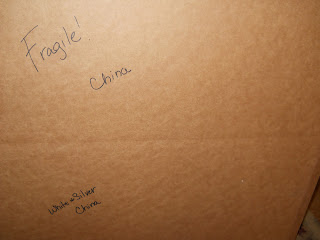 Grab a good sturdy box, make sure and tape the bottom a couple of times for heavy items like china and books and grab a marker.  Try and do some of the labeling before the box gets so full that you have a hard time maneuvering it around, trust me on this one, you will appreciate this tip after a few full boxes.  And don't get lazy when it comes to labeling; remember by the time you are done with this thing you are going to have A LOT of boxes that are all going to look similar.  Label all four sides and each flap that will be the top; that way you will be assured that no matter what side is showing when it is set in your storage area; the one that is out will show it's contents.

For fragile items now is when we can finally bring in our recycled materials; if you haven't already used a recycled box.  I used egg cartons in the bottom of the box, because of course everybody and their Mother has brought me egg cartons and now I can use them up!  The point is, take something that you have a lot of, that will be good for packing material, like old socks or underwear or the husbands old OP's, yes, I know they are out there because I have a drawer of them myself, LOL!; and use them/it for something more useful than just a space taker. 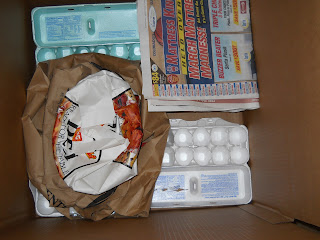 As you can see in the picture, I then wrapped my large platters in used paper bags and chicken dinner bags.  I did the same with the gravy boat, sugar and creamer containers as well as they could then be labeled since I rarely use them and won't need to unwrap each piece sifting through them looking for the ones I want when I am running late next Christmas; not that that ever happens to me.  I did the same with the million tea cups that came with this beautiful white and silver set of china.  What is up with that?  Anyway, I individually wrapped them in newspaper and then put them in two plastic grocery bags (finally a use for these horrific things!!) and tied them up and labeled them too.

Once it was all labeled and secured another layer of egg cartons and it was ready for tape.  This box was at the way top end of the heavy range for what I would want to do to any mover let alone two movers with bad backs as we will never ask for help with moving our personal belongings....Now as for moving the rest of the farm we just may be looking for a few good volunteers.

Happy Easter Rebels!  I got the most amazing Easter present ever!!!  My second hatch started a bit early on Thursday, with Royal Ranch's first chick; we were so excited, especially since the chicks were pre-sold.  The poults started coming the next day, but too slowly for the sake of the chick.  She/he was getting DARN hungry and wanted OUT of that incubator.
So last night we very quickly opened up the incubator (you are not supposed to open the incubator mid-hatch due to dropping the humidity level), and grabbed out the one chick and five, YES FIVE, poults!!!  I was concerned about the other "babies" picking on them, so we put them in a box in the brooder.  If you all remember, we have four chicks and poults that were hatched/purchased in late February; so I was not sure how they would all get along. 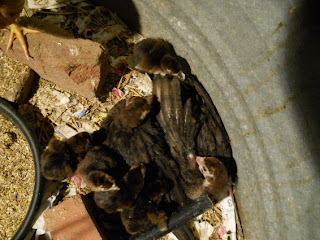 I know it is hard to see, and that is because the poults that are just babies themselves already have the instincts to take care of the itty bitty babies!!  The new ones are safely tucked under the wings of the others.  Mother Nature truly amazes me!  Happy Easter and God Bless.
Posted by Judy Jeute at 9:33 AM 0 comments

Promote Your Page Too

Judy Jeute
I am a wife and mother first and foremost. An Author, Environmental Entrepreneur, Animal Consultant and organic rancher; but mostly I just love my life and enjoy sharing it with my readers. Although I do deal with some chronic health issues...